The Pot of Gold at the End of the Rainbow is... 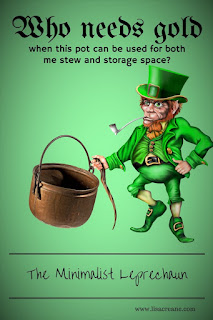 Empty, and blessedly so.

A heckuva lot more physical and mental space. Less anxiety. More money. There's no downside.
There's just getting from here to there.

Maybe one of these will help.

Simple Living tackles health, time and finance streamlining but I like the one on home.


I do not have a minimalist wardrobe but I see the attraction. This may not appeal to you but truly nailing your personal style and then carrying it through day to day, no matter what is nagging you, unworn from your closet?

Well, there wouldn't be anything nagging you unworn from the closet, that's the point. Sounds like heaven.

Zen Habits takes on overabundance in multiple ways too. Some of my faves:

72 Ideas to Simplify Your Life

And, with all that extra time and energy you can transform your relationship

More on reducing clutter from:


I dream of clean (foolproof!)

You don't have to spend less. reading my tealeaves promotes intentional luxury, which sounds pretty good--make every purchase count and last.

But if you're going to buy something it should probably be a book :-). Maybe this one, which came out today:

The buy links are on Josh's becoming minimalist website but sensibly suggests you stroll through your favorite bookstore and pick up a copy there.

I love this book.

There are plenty of other books on purposeful living so it must be his writing voice. I like his blogs, and the book is ever better--smart, kind, accepting, inspiring.

His definition of minimalism:


“the intentional promotion of things we most value and the removal of anything that distracts us from them.”

That kind of helps-anyone clarity is a gift.

How are we doing at the homestead? As this is the last of the 4-part Less Stuff posts, I will tell you that Mark tackled the basement brilliantly, paring down to camping gear, tools, and a few not-needed-at-the-moment-but-soon kid items. 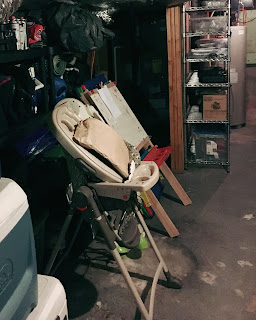 Before yesterday this entire screen would have been blocked by the jumbo pile of camping gear, now neatly stowed on a couple of industrial shelving units from BJ's.

This feels so good.

Because yes--these are our priorities. Keeping our home in good repair. Getting outdoors. Spending time with the kids.

Getting your life into alignment with what you love is a looooooooong process but totally worth it.

Posted by Shoot For The Stars Foundation at 9:42 PM No comments:

The Real Problem of Trophies

A recent youth sports pushback on awards for everyone followed by a teeing-off by an NFL player on
participation trophies has led to a recent wealth of opinions on the subject. I categorized them for you so you can choose which side(s) you're on:

Dallas News editorial:  : Awards should be only for winning and sportsmanship

Evan Grossman in Men's Journal:  They make our kids soft

Patrice Bendig on Huffington Post:  As a twentysomething in the workplace I'm in praise withdrawal

Lisa Heffernan on Today: They reinforce the right values of effort, teamwork and persistence

Kelly Wallace on CNN: They have their place (i.e. with younger kids), aren't to blame for narcissistic kids (that would be parents), and are expected as much by parents as kids (esp. in high-cost sports). Links issue to earlier piece on how hard (and necessary) it is to let kids achieve and fail on their own.

Despite the different takes, all pretty much agree that losing is an exceptionally difficult emotional experience but a constant in life so buffering the blows when kids are young won't help them learn to cope when they're older. Also that parent overinvolvement, youth sport specialization and confusion about what constitutes self-esteem are formative issues for the last couple of generations.

What they disagree on is whether an inclusive celebration of participation is a bad thing by itself.

I've never been a coach but I know plenty and sympathize with the pressures but can't speak from that perspective. I've never received a participation trophy so I don't know if that feels good or kind of dumb; perhaps it depends on the context. Our neighbor Mr. Joe is currently thru-hiking the Appalachian Trail; if I spent six months on that journey a medal at the end that said "completer" might feel pretty special, regardless of my relative time.

But my main problem with trophies as a mom of nine kids is the issue touched on in some of the above pieces, both in practical and symbolic terms of clutter. Do you dust a plastic trophy without your kids' name on it? Do you throw it in a box? Ten years after it's been given do you chuck it in a landfill? And does having a host of relatively meaningless awards dilute the meaning of the few that symbolize stellar achievement or a big deal win?

Most of all, does it make me a bad mom if I quietly thin the chaff from the wheat?

As the mother of a large, sports-loving brood, most of whom have left this nest (and the awards behind), I am left with pockets of trophies and medals in almost every room. 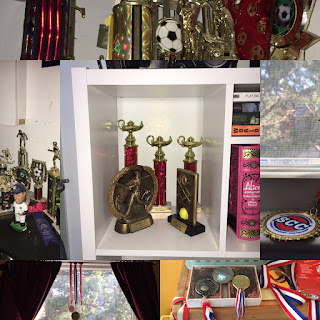 They seem sacred childhood hallmarks so I've left them in places semi-honored to semi-obscured. But some are not aging well. Glued-on nameplates are peeling off, gold plastic is peeling off featureless black forms beneath. The truth is showing its ugly face: some of this stuff is junk.

And it obscures the truly great that lies in the cluttered midst. Academic honors for being the best of something in a school of 1000 students is impressive. So is a state championship, or an athletic conference first place or competitive invitational first place. Ironically, none of these trophies is made of the marble and steel, three-wish-granting-lantern form I cherished growing up. Those are still at my mom's house. And having to buy so freaking many, even the top gun awards these days aren't built to last.

So this week I decided to find the most important awards amongst the many and find a place of honor for them. The rest don't have to be chucked but can be periodically swept away in thorough, husband-led room cleanings. One of our kids already did this herself ("yeah, that stuff was taking up valuable real estate in my room") and Special Olympics medals get a pass. The rest of the kids don't care as long as they don't see the trophies getting thrown away because that seems kind of cold.

My parents had a glass-doored bookcase for this purpose. There's not a lot of those around these days.

Where would you put the "keepers" where they'd look like they belonged?
I think I know but I'm open to better ideas.
You're the best.


Posted by Shoot For The Stars Foundation at 9:20 PM 2 comments: