I Will Send You Free Books

We have half as many books in our house as we had last year. This is my strategy with paring down and organizing in general--divide into roughly equal piles of "top half" and "bottom half" based on how much you like something and it's a whole lot easier to let go of the bottom half. You can almost feel that bottom half weighing you down, and feel lighter when you let it go (see part 1 of this series here)

In practice, rather than making piles, for every book I kept on a shelf I had to find another book to put in a box and move out.

We still have a lot of books.

And there are always more incoming. I have 20-30 books on pre-order at all times (to make sure I don't miss a new release by a favorite author), plus new interests or authors I want to try out. Bookstores are my idea of a good day shopping. When I love a book I take out from the library I'll buy it somewhere else so I can re-read. Mark has favorite authors he buy on release day, as do Ciara and Liz. Keeping my mom stocked in books is also a pleasure, and a quest since I try to give her complete series.

So now I have a system of moving books out as new books come in. Some can't be saved and go to the landfill (Sorry planet but I've found that people want only one kind of dirty book and it does not involve coffee stains). Some go to the library (a few for the shelves, most for their lobby sale). Some I trade for credits at our local used bookstore (Penny's)  where I get older books I wouldn't pay full price for but would pick up and try for a fraction (I've found some new favorite authors this way). Some I re-sell on Amazon (only worth it if they're out of print). 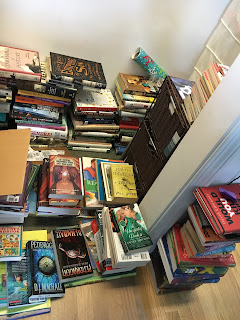 Read more »
Posted by Shoot For The Stars Foundation at 10:53 PM No comments:

The more stuff you have, the more time and energy you have to spend dealing with it, or avoiding becoming minimalist gave me the number I was looking for: the average number of objects in an American home.
dealing with it. This reality is at the heart the Tiny House movement, the Tidying Up books and (of the flip side) our cultural fascination with hoarders. The cool site

What do you think it is?

My husband Mark guessed 12,000,which was wrong.

Guess yourself, and then read the post (“21Surprising Statistics That Reveal How Much Stuff We Actually Own”). Which stat did you find most astonishing? Mine was no. 16 but they all explain a lot.

I do not own a tiny house, and after downsizing from a travel trailer to tents don't think I'll ever go in the other direction and get an RV park model/log cabin (the original tiny houses). But I'm fascinated by those who do, especially those sent through the public wringer on Tiny House Nation where John will put a hula-hoop in the front yard for each person (or some such thing) and say all their personal items must fit into that space.

Impossible, for most of us, but hey, they signed up. I have a suspicion that many of the people featured on other tiny house TV shows (Tiny House Hunting, Tiny House Hunters, Tiny House Builders, etc.) rent storage units for the belongings they can't give up or find a way to give away.

That last concept is the key to the cult of Maria Kondo tidying up book followers. Her process is an idiosyncratic one (why hasn't there been an SNL skit on this yet?) but as I laugh about it (hold objects in your hand a certain way, see if they spark joy, if not then find them a new home) I also do largely as she says.

Because why should you keep anything you don't like? You might have some gut-level defenses (it cost so much, it was my aunt's, I'll fit into it someday, we might have more kids) but none of those make sense unless you like the damn thing. In that case, keep it. If not, give it away. Simple, right?

Because the effort needed to deal with a mountain range of stuff (papers, pictures, books, clothes and everything that goes into a kitchen, bathroom, office, family room or workshop) is immense, more than letting it all sit with an "organize later" timeline. Until one day a switch flips and you really can't take the clutter anymore. That's when doing nothing is harder than starting the process of fixing your life.

We all get that what we have is not who we are, at some level. But our possessions symbolize our priorities and personality, to the degree that anyone in your home would get a sense of who you are without your being there.

Big kitchen, lots of gadgets? My guess is you're social, innovative and nurturing.

So every item we give away can feel like a part of ourselves we're tossing. This is most extreme on the quite-depressing Hoarders  but also the backbone of humorous, upbeat shows like American Pickers where Mike and Frank are often sent in by family members as an intervention for those whose collections have taken on lives (and warehouses, attics, basements, yards, garages and rented storage units) of their own.

Then again, like the toppling "TBR" piles of readers, having more stuff than you can possibly use or cope with doesn't say anything good about us to the world, and makes us feel lousy about how wasteful and ineffective we are mired in patterns of excess consumption. Jared Diamond wrote a  NYT op-ed a few years ago on the consumption factor of developed countries being 32x higher per capita than in developing countries, who aspire to such lavish ravishing of finite resources.

Mine was filling 20 boxes of books from one corner of one room of a family member's office who wanted help de-cluttering. And while sure, it's unusual that it was only one corner, most of us could do this several times over in a full-house purge. I certainly could. And should.


Mark is a ruthless cleaner and tosser. What he sweeps from under the couches goes into the garbage unless it's a TV remote or high-denomination money. Me? I shake off the hair elastics in the pile, pocket the coins, ponder the plastic piece of something (is this the bottom of that lantern that's always dropping its batteries?). I throw and give away lots of stuff, but not without thinking and organizing.

Mark prefers his way. I do too, in all honesty. I have better things to think about and have never (truly: never) missed anything of significance that he's chucked or donated. Rarely do I even notice. But there are areas of our house that can't simply be Markcized, and the problem of managing the (X thousand) items in our home goes deeper, into how much we buy and why.

On deck:
Part II: I Will Send You Free Books
Part III: The Real Problem of Trophies
Part IV: The Pot at the End of the Rainbow is...

Posted by Shoot For The Stars Foundation at 8:38 AM No comments: