Over the last month my husband decided to redecorate the downstairs of our house instead of doing the same old cardio rehab that everyone else who has mitral valves repaired does.

He was happy to paint the house. Apparently that's what having heart problems--that are then completely fixed--does for one's mojo. And for my own, because when he asked what colors I wanted the walls I went in unexpected directions. Rather than the dark and dramatic tones I've always gone for, I wanted airy and light.

I'm learning this concept in writing but it's even cooler visually, and once I started looking, I saw it everywhere. When we went to Montreal for our quick World Cup jaunt we saw this wall art on curved buildings, so the beauty was not only from the artists' work but the architect's.


Diving in, Mark painted our dining room table blue found a green credenza he liked at Costco and I found some dining room chairs I liked at Walmart.com. 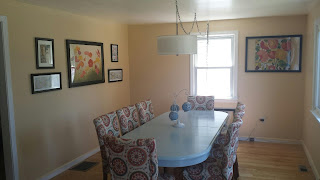 Picking up courage, we got bold on the art print sites. Most of them suggest prints based on one you say you like, or a color, or an artist. We mixed styles and eras, I ripped some photos I liked out of magazines and framed them, Mark told me he liked an artist (yes, one, Simon Bull) but had never thought to mention it. I fell in love with a Gustav Klimt print (Tannenwald). We ended up with 25 prints from art.com and a Simon Bull canvas from ebay for under $200 total, then went to JoAnn Fabrics and bought a bunch of frames on sale. 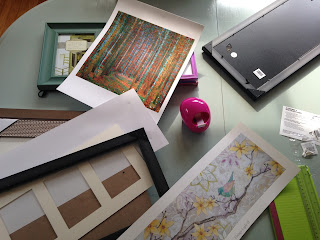 Which did not fit the art, which came in 25 different sizes. There was trimming and maneuvering involved but I learned from scrapbooking that cropping is fine to amplify the essence of the picture. To get it on the wall also seemed a noble goal. 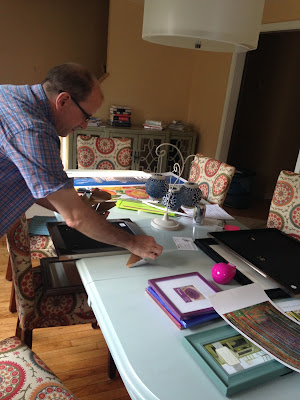 Mark found a teal couch on clearance at a local furniture warehouse to replace the dull olive one we found was broken when we moved it out of the way. That little elephant lamp is from Walmart, and is even more adorable in person. 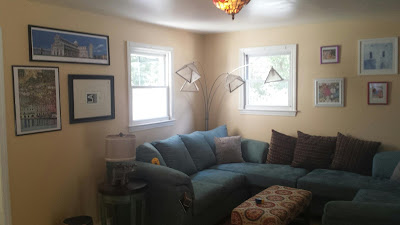 The rooms feel different but familiar at the same time because these ideas were all inside of us, though it feels good to get them out into the world.
And enjoy them while I'm sitting on the cozy new couch, getting busy with Pinterest.

Love, Lisa
Posted by Shoot For The Stars Foundation at 6:21 PM No comments:

I am not an alarmist about concussions; we all get banged up in life and the brain is resilient. Though we can't regenerate neurons (which is the problem with spinal cord injuries), our neurological system adapts to insult and injury with shocking speed. Most people recover from a concussion/mild traumatic brain injury completely within a few weeks or months but the average is less than two weeks. If you're reading this series because you or a loved one has had a concussion and you're concerned about long-term consequences, you're better off at a good educational site, like Head's Up from the CDC.

This series is for and about those who recover more slowly, or make gains and stop, or think they've recovered but notice, over time, that a few lingering cognitive problems are becoming worse.

I've posted a few times on this subject over the last three years and it's always been difficult. But not writing about it has been increasingly hard too. There's a mystery here, one I'm bent on solving, at least in terms of myself. Sharing little hints and secrets as I found them would be cool.

What stopped me is the shame to being taken down by something most people bounce back from, along with the inherent questions about my character. What is it about me that led to persistent, debilitating post-concussive symptoms? The answer couldn't be good.

Then I thought about postpartum depression. Every woman falls apart at some point after having a baby. How could you not? Crying's contagious. But not every woman falls into an abyss and hates her baby, and herself. To do so shows a lack of gratitude--you have a little miracle--appreciate the gift. Maybe relationship problems are the cause, or you're one of those women who can't take the daily sacrifices and grind of motherhood and wants to flee back to the manly world of working for pay.

Judgments and blame, flaws and shame. None of it relevant to the problem.

Because no one would choose to spend weeks and months of their child's infancy in a black hole of blankness or suicidal despair. Just like no one would choose have their life derailed by a brain that's balking at business-as-usual. So I'm trying to let go of the shame and embarrassment and get back to the mystery.

What's going on in my head? Let's find out, and see where that leads us.

As a primer for those who haven't walked a mile in my flip flops, those with long-term symptoms after one or (especially) more concussions often describe with frustration the "fuzzy" state of their thinking. Your vision is fine but you miss important details when you're reading or driving. Your memory banks are sluggish to open, and in some areas locked shut. You hear the words people are saying but can't process their meaning before more words follow and you're semi-lost. Routines like buying groceries and paying bills and playing softball become muddled and riddled with mistakes. Your instincts are flawed and your judgement can be poor. Some days you can't puzzle your way out of the simplest problems, like why the tire pressure light keeps going on in your car even after you put air into your tires. Your behavior swings between impulsive and paralyzed without stopping at "normal" in between. Life keeps speeding by and you can't seem to keep up.

You barely recognize yourself. You used to be so smart and tough. You are scared.

The first advice you get is to rest, which isn't easy. With eight kids, a job with a lot of responsibility and a great husband often working for 12-15 hours/day, I took the "rest mantra" as more of an advisory than a edict. I did rest, when I couldn't see straight from a migraine, or was too nauseous to finish making dinner. Though I knew I hit my head and lost consciousness, I didn't even recognize my first concussion until the next one gave me an unpleasant déjà vu.

Don't follow my lead, kids. This was not good self-care. And here's where the rabbit hole of "what part of this is my fault?" leads--to the exact same place. It's useless energy spent because there's no way to know "why?" That's not the mystery I'm trying to solve, not really. Treatment recommendations for TBI symptoms that persist are still rudimentary and I understand why. Brain research is still in its own infancy, which makes vast leaps and bounds of new knowledge likely in the near future, but only because the mechanics of brain plasticity are such an unknown. But this won't happen soon enough to be of practical use to me.

What I do know is that at some point resting and waiting to recover became a pointless exercise in patience and wishful thinking. Because expecting my mind to clear at that point was like waiting for mud to settle. I had to do something to help things along, or accept my new life.

Various outlooks from my journey can be found here but aren't the point so I'll summarize. I made a lot of early gains in the first six months, then plateaued; asked for stimulants because I'd read they could be helpful and they were; then plateaued; did some research into one of my most hated symptoms (slowed auditory processing and speech) and got some evaluations and advice from a specialty clinic that led to another burst of progress; then plateaued; asked for cognitive therapy which took many months to get approved, and it helped. But by then my goals had changed from "recovery" to "adaptation." Memory strategies to work around deficits. Things I could say to slow a conversation down to my speed. My working diagnosis (which means "until proven otherwise") was cognitive dysfunction due to repeated traumatic brain injuries. Returning to my job as a hospital administrator running multiple child and adolescent psychiatric units was not realistic.

I knew this, deep down. But I also believed my neurologist when he said significant gains could still be made if I switched my focus from a "brain" problem to a "perception" problem. I know, I know. Perceiving is done in the brain. But the difference is between a hardware and software problem in a computer. My brain has healed to the best of its ability. What's plaguing me now are all the hardened neural pathways that may have been workarounds initially but are dysfunctional now.  This is somewhat simplistic but the metaphors work for me.

Basically, I need reprogramming, and I need to do it on myself.

This is what I've been working on since January of this year. And I've had some success--those little hints and secrets I referred to above. In fact, I feel like I'm on the brink of "leaps and bounds," though to be honest I've felt that for a few months now and so far I'm still making baby steps. My ambition is likely impeding my progress.

Life can be a real bitch that way.

So I'm changing my goal from "getting better" to "understanding." At least that's the way I'm trying to outwit myself. This self-reprogramming is tricky.

Fine, I'll go with having both goals, for now. There are some exercises in the exercises I'm doing for Neurophysiological Disorder (NPD)--a variation of Mind Body Syndrome (MBS) and Tension Myoneural Syndrome (TMS)-- where neither healing nor understanding are the goal. I'm simply doing something (over and over) to break a pattern.

The treatment's nifty, and exhausting, and most often used for chronic back pain. But since I couldn't find much on using these treatments for Post-concussive Syndrome (PCS), I've been itching to write about them, sometimes with dread, often with a bewildered  kind of enthusiasm. It took me hours to write this post and when I posted it still didn't make sense so I had to rethink and redraft and post again more than a month later. I gave up on finding any pictures to match.

Love, Lisa
Posted by Shoot For The Stars Foundation at 6:19 PM No comments: