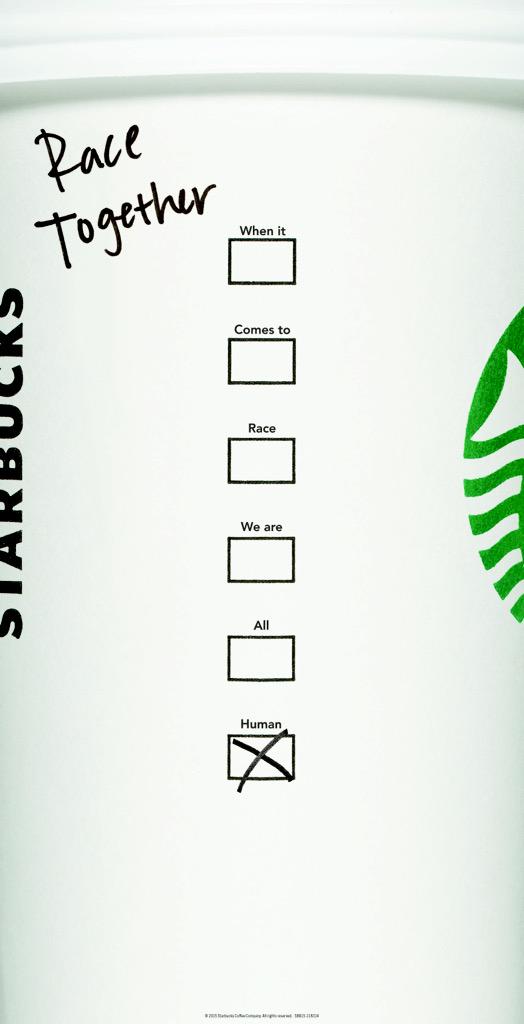 I know it's weird that it's a Starbucks campaign but I love this. I believe this, deeply. When I saw ad this morning in my USA Today I smiled for a long time.

To me, race is one of the things that contributes to our each being unique and different but should never be used to judge or divide.

I grew up in the suburbs, in a city that was predominantly white like me. Without enough black kids in each grade to cluster together for support, we integrated. When I walked to school from one house, I went with my friend Stephanie who was white. When we moved and my nearest friend changed, I walked with Charlene, who was black. I'm pretty sure the black kids in school would have liked to be a larger group, not just to feel more secure when some bigoted kids began bullying, but also because the scrutiny is intense when your looks stand out and who doesn't want to blend in, at least some of the time? Sure, being extremely tall or having weird teeth or fiery red hair will also make you stand out, but in none of those cases are you seen as a representation of tall, weird-teeth or red-haired people in general.

But if you're a racial minority? You're seen as a representation of your race, with all the inherent stereotypes and scrutiny and pressures in play. That's racism, and so deeply ingrained in American society that it is a rare individual who can go to a public event and not give a highly accurate estimate if asked afterward what the general racial division of the audience was. Also a rare individual who could give similar breakdowns by hair color or age groups. Because when categorizing other people, we go to race first, and think doing so is meaningful because it tells them something important about the other person.

In doing this, we're wrong, and perpetuating racism.

I'm not saying there's anything wrong with having strong racial identity or pride. Go ahead if that's a big part of who you are. Wear a tee-shirt proclaiming it loud or proud. At least that will be relevant info for someone trying to tell from your looks who you are and what you stand for. But it's also okay for race not to be a big part of who you are, and either way to expect that exactly zero racial stereotypes will be used to try to figure you out.

We all give clues to who we are through how we dress, do our hair, speak, and interact. By watching someone we can form an opinion about whether we think we might like them or find them intriguing. Knowing whether this "first impression" is right, however, involves getting to know them. Since we can't (and wouldn't want to) do that with everyone we meet, we end up knowing a little bit about a lot of people, a lot about a few, and nothing at all about the vast majority of people we come into contact with.

Because race isn't something you can choose to display or not, it's not one of those clues that gives us info on another person. It just is, like your hair or eyes, and it might be important to you or it might not but to know you have to ask, and listen.

My kids get this, because our society's becoming more integrated, and the more kids are raised with exposure to other races and cultures, the more this fact seems obvious to them. My husband and I have both black and white kids, and despite the fact that they--like us--were raised in predominantly white, middle-class suburbs, their friends are a pretty wide blend of races and cultures. Our kids date whomever they want, and our one grandchild is biracial.

More and more, I think younger people will close a lot of our social divides. The collective Gen X shrug about gay marriage became a tidal wave as they matured into adults and didn't see the big deal. Even if you come from a place with one dominant race or culture, it doesn't take a lot of contact with another to get that anyone can be a Simpsons fanatic, or have learning disabilities, or a great jump shot.

And since younger generations have fewer hurts to hold onto, it's easier for them to let go of them and say race, culture, religion, sexuality are all ways each of us can be different, but none of them changes the main way we're the same. We're all human.

Love, Lisa
Posted by Shoot For The Stars Foundation at 2:17 PM No comments:

The Storied Life of A.J. Fikry by Gabrielle Zevin


I understand why a lot of people liked this book. Its main character is a cranky, grieving mess at the beginning, one who I suppose is hitting bottom, but he’s smart and acerbic and pretentious in an amusing and sometimes insightful way.

I didn’t like him, though, and didn’t think that Gabrielle Zevin tried in any substantial way to entice me into liking him. AJ is not unpleasant in an Olive Kitteridge kind of way—he’s more withdrawn and private, which is not only a tough act for a bookseller but also makes you less reactive as a reader.

He wants to drink himself to death? No one’s going to stop him, and for a chunk of the book, most readers aren’t going to care.

Then a couple of big things happen and AJ turns it around, not in an earth-shattering way, but in a genuine way that’s consistent with the kind of guy we know he is. At forks in the road he makes a few turns toward caring when before he would have passed and that’s pretty much how you have a meaningful life.

There’s a gentle humor and understanding to the book that validates how hard it is for people living in dark places to change, and how simple. I like its sensibility, kind without ever being the least bit schmaltzy. For those who need an edge to their stories, this one should fit.

But for me, not really liking AJ is a problem that kept me from engaging fully with the story. I read along, not skimming but not caring overly much, and when bad things started to happen toward the end was shocked to find myself tearing up.

That’s a mark of Zevin being a good writer. I ended up caring despite myself. But I didn’t enjoy the book. There were no highs to offset the lows. It was like a beautiful winter day. You can admire the snowy landscape, be deeply affected by the cold, but what you crave is a roaring fire, a blanket, a cup of coffee and gingersnaps, and someone to kiss. Deep stories cover both terrains.

To balance AJ's humane and elegant crispness I wanted some messy, babbling warmth and to me it just wasn’t there until the one falling-apart scene when (view spoiler)[Amelia reaches between AJ's legs under a sheet (hide spoiler)] and I thought "Hey, where has this been the whole story? This is what's missing. Enough with the dispassionate stuff, give me a little crazy love."

But by then it's too late in every way.


View all my reviews

Posted by Shoot For The Stars Foundation at 9:03 AM No comments: