Backstory and Conflict in Real Life

This is how things usually go in my house when I let my husband know one of our kids has done something wrong.

Me: There's a new scratch in my car door and it wasn't there the last time I drove.
Him: Who had the car since then? That'll be the last time they get keys until that car door is fixed.

I know but I want to know what happened so I'll go talk to that kid. Of course there are blanket denials at that point and lots of cross-pointed fingers, Elaborate stories about stray kites being flown in the front yard and those turkeys that turn up every so often and peck at my car tires. All of which I have brought upon myself because I can't punish a child without understanding what happened. That's me.

I need to know backstory.

This is one of the things I've learned from studying fiction that help me understand real life. My husband, bless his heart, does not. He can take the keys, make the kid fix the scratch and hand back the keys weeks later without an ounce of guilt or a minute of lost sleep. Even if he believes there's a chance that it wasn't that child's fault, he's a firm believer that karma's a bitch so this balances out something else they did wrong that never got caught.

He also likes to read books and watch movies that are action-packed and full of humor because that's entertainment, while I can't get into a story or show unless I like the characters and know where they're coming from.

I find most people are on one side or other of the backstory divide, and pick someone for their mate from the other. If one is driving and gets cut off, they beep and call the other driver a jerk. Their mate then points out that the other car was just avoiding a pile of rubbish in the road.

It\s true that they almost caused an accident, but for me, a backstory junkie, I wouldn't get mad at that driver, just feel lucky to have avoided catastrophe. On the other hand, if we drove past them and saw that the driver had their phone in one hand, a soda in the other and was driving with their spare pinkies then yeah, I'll get down with cursing them out.

Why not pair up with someone who always agrees with you on issues like this? Because it's boring. What if when you are dating, the other person's response to half your statements is something along the lines of "Totally. Me too." Most of us are not so narcissistic that if given the chance we'd actually date a slightly-altered version of ourselves. No, our dream date is usually someone so far outside our everyday experience that we find them endlessly fascinating and crave their attention in return.

And this is something else I learned from fiction. Conflict makes the world go round. It's
interesting to be part of a culture clash or new world. The perfect example is a picture of Debi Mazar and Gabriele Corcos in the March 2015 edition of Real Simple (which I can't link to until it's a back issue so I'm linking to a totally unrelated but similar article above) where she's wearing a strapless denim sundress with a zipper jagging down the front and killer strappy heels and he's wearing--I don't remember, maybe jeans?--while they're feeding the chickens they keep on their property in Italy.

Actually, he's feeding and she's standing there looking like her movie star self. These two have different accents, different styles, different backgrounds, different almost-everything and that makes their show Extra Virgin on the Cooking Channel so much fun.

This teaser for this season's premiere shows why: Season 5: A Gift To the Neighborhood. They're obviously deeply in love, affectionate, and kind to each other but if you watch long enough you also see the ways they drive each other crazy too. They wouldn't have made it past season one, frankly, if they were always getting along and coming at problems from the exact same angle. We find people different from ourselves to be the most interesting.

Of course you can take it too far and argue constantly, and in ways that make everyone feel awful. Lots of books have movies that do this, all of which I avoid. Conflict for its own sake holds our attention the way a nearby train wreck leaking toxic gas would: The contamination may spread! Watch out, we're in danger. Witnessing a fighting couple will make you shake and say to your partner "Thank God we're not like them," but also wonder what it would take.

Well, if you're a backstory person you wonder. If you're not, you stop at the "Thank God."

Which is fine We need not think alike to love alike (attribution here), and qualities that make your partner unique can be gifts (see tinybuddha on this here).
But first and foremost we gotta love.


Posted by Shoot For The Stars Foundation at 3:19 PM No comments:

You never stop having opinions on what your kids should do, no matter how old they are. Why would you? If you can generate an idea about how the guy in front of you should drive or the point guard on TV should drive to the basket, your cup of advice for your kids will surely floweth over.

The only thing that changes is how much they have to listen.

This is how it tends to go for Mark or I with our adult kids.

Parent: Bar-hopping is a terrible idea, and looking for a good band sounds sketchy. Besides, you hate cover charges. Why not just go to that concert?

And that's what it's like to have absolutely no negotiating power, folks.

They have their own cars, phones, opinions and friends and they're going to make their own mistakes. Or not. The hundreds of hours we parents spend analyzing our kids lives and generating "if only's" is basically wasted.

Except on the youngest two. They are still within our grasp and the negotiations are more of a volley.

Parent:  Where's the bonfire? Who's driving? The roads are icing after midnight, let's make that your curfew.

18-year-old: (rolls eyes but answers questions and agrees to curfew) Can I have money for the  diner after?

Parent: How 'bout you clean the fridge. I'll pay you for that.

Kid: The fridge is gross.  How 'bout I clean your car instead.

Which is how we ended up promising our 13-year-old a treadmill this week. 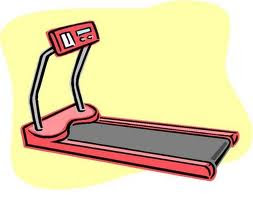 We were wrangling over high school electives during a dinner out and I was pushing hard for band because I love her on drums but she wanted to take a shop class instead and there's nothing wrong with that, of course. But I still wanted her in an afterschool activity, and I had leverage because we have to sign the form so I pushed for cross country if she doesn't do band, and she said okay.

If we got the treadmill. By April. She's a softball player, not a runner, so she needs prep time.

Good negotiations end the moment both sides think they've got a "win" so although I countered with "how 'bout we go to the Y every day instead," she rejected that with "I hate the Y" and we went back to the agreement on the treadmill, Her dad and I shook on it and she recorded the deal with a voice memo on her phone.

Which leaves me wondering for the hundredth or so time about a home gym. I want one, Mark wants one, our kids have always wanted one, and now we almost have room. But no one needs a gym in order to run, or in my case walk, and filling up our house with stuff as our kids move out and on with their lives is not a way to downsize into the smaller house we imagine. There's a blog I read last night that is way smarter than me about this trap by Madeline Somerville here.

But the deal is made, exercise is good and if I can buy a treadmill no one's using rather than a new one, I'm not de-greening the planet, though I'm also not getting a warranty or helping the economy. So maybe I'll settle for de-cluttering the space to fit it.

I still need advice, though, on what makes a home gym (or even just a treadmill) used rather than ignored. Because the deal was not that our daughter actually run on the thing, mind you.

Negotiations. The devil's in the damned details.

Love, Lisa
Posted by Shoot For The Stars Foundation at 9:03 AM No comments: