To balance thinking, feeling and observing with action in the DOCC program, in July I followed the Stage 4 step on Getting Organized. Along with my amazing productivity blogging this month (except for today, of course), this is one of the most visible and significant markers of progress and change for me during this program.

My organization has been really terrible since my injuries and getting a bigger wall calendar wasn't the solution. Yes, keeping track of the kids' appointments is important, and yes lists and stickies help, but the problem was larger. Though my work wasn't my purpose in life, it was important. There was a void. And "keeping busy" made things worse for two reason.


So I needed to find a way to a) track the minutiae I thought was important, b) remember what I'd done each day so I didn't beat myself up for getting nothing done and c) create a system that helped my track writing and other projects, using d) the things (to do lists and a schedule) that had worked in the past. 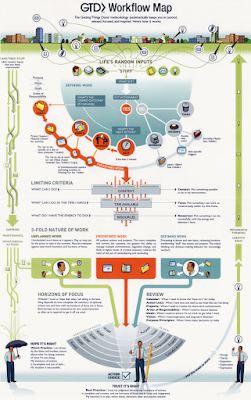 The Back in Control program recommends Getting Things Done, and of all the things I've tried, this works the best for me, albeit in a simplified, somewhat sporadic form (a creation still taking form, let's say). First let me tell you what doesn't work. This nice workflow diagram on the right.

Way, way too complicated. I don't even understand most of the book once David Allen goes beyond "here are the problems you're dealing with," which I totally get ;).

But the top half of the diagram made sense when I saw it in action. Here's the close up of the top half, in the collecting of "stuff" (ideas, tasks, resources, etc.) and what to do with it: 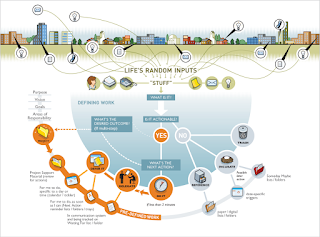 I do need my mental cache free of clutter, and trying to remember everything that came at me took it all up and then some. Finding a place to store and sort all this "stuff" was freeing, and helped me relax and focus on learning new things (or relearning old ones). I used the GTD hack by tacanderson and this book I carry around with me (in a me-adapted way) works pretty great.

When I use it. Which is still only about twice a week, but I force myself to write what I did on the other days so I can keep track. This visual memory system has been crucial to my setting and reaching goals over the past few months. Writing down good ideas before they're gone saves me so much time and struggle in trying to remember them later; I was always doing the equivalent of looking for my keys, for hours and hours a day. "Who was I supposed to call?" "What did we just run out of?"

All this is pretty much gone.

Filing systems didn't work for my re-locating paperwork (like, say a prescription) because once the papers weren't visible to me, I couldn't even guess where they might be. So my husband hit on the idea of filing everything in shoe and sweater racks. This was downright brilliant. Nothing fancy but stopped all the moving around of "stuff" that got everything lost. 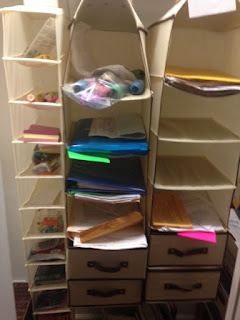 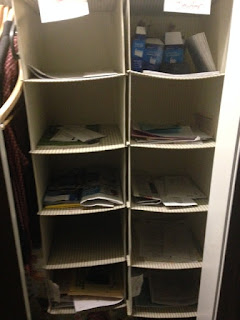 That's pretty much it.

Taking care of things that take less than 2 minutes right away.

Writing down everything else, getting it into my daily book and sorting through it a few times a week.

Making visual organizers for stuff I need to keep.

All combined to free me up to the point that I could devote more time and energy to this program.

Less wasted mental energy and self-recrimination. Fewer mistakes. Not as much conflict over who put what where. All good and better.

So although this is Stage 4 stuff, you can (and should) find something like this that works for you too.

Or at least works when you remember to use it ;).