At Hogwarts, the sorting hat chooses your House and each of the four has a different tone based on the values of the founder and which of the four elements the house represents. 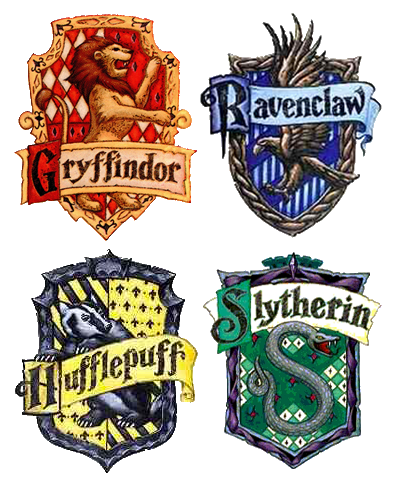 Since the sorting hat senses both innate and admired qualities when make a choice--that is, both who you are,and who you want to be. It also allows for your input. Harry flat-out rejected Slytherin, and no one goes to a house against their will.

Most people who read Harry Potter think they would have liked to be in Gryffindor.
Of course. Gryff saved humanity.

But they are an awfully intense bunch. It might be nice to have some quiet study time in Ravenclaw, or make brownies with a buddy in Hufflepuff. If you're competitive and want to win a Super Bowl, you want to be in Slytherin.

I'm a pretty mixed bag in terms of personality traits, as are most of us. On the personality test below my scores were Gryffindor (89), Hufflepuff (85), Ravenclaw (83), Slytherin (36). This feels pretty true to me. I'm a brave, caring, geek. I've never been ambitious or cunning. At the end of the day, I won't back down in the face of adversity so Gryffindor rules the day but what are you fighting for if not humanity and wisdom? Therefore Hufflepuff and Ravenclaw are a close 2nd and 3rd. As for Slytherin? Well, I'll never be rich.

The sorting hat says that I belong in Gryffindor!

Said Gryffindor, "We'll teach all those with brave deeds to their name."


Students of Gryffindor are typically brave, daring, and chivalrous.


Take the most scientific Harry Potter Quiz ever created.

Any of Hogwarts dormitories would be welcoming, though a gentle soul in Slytherin might be bullied, and in Gryffindor ignored. So the sorting hat keeps the mismatches at bay, and the Houses relatively undivided within. Everyone might not get along, and might debate an approach, but once it was decided they'd be united and effective.

Hogwarts is a sanctuary where everyone fits in and for that alone, it's a fantasy. Before they came to the school it was biology and
fate that determined where the little wizards lived, ranging from Hermione's warm but boring muggle house to the loving chaos of the Weasley cottage.

Worst of the lot was Harry's life with his aunt and uncle, where he was treated as the male version of Cinderella. The tone in the Dursley house was frantic and bitter, except for the overindulgence of little twit Dudley.You can feel Harry finally breathe once he's left the building, and you sense that the Dursleys are doing the same.

Just like some young adults when they get out from under their parents' thumb. And their parents, once they say their good-byes and slowly shut the door behind their moving-out kids.

My youngest son Chris went into the Job Corp this week, and was very happy to go. He's chafed so rawly under the household rules that he once ran away to sleep at the town duck pond for the night. Another time he slept behind the swamp at our high school. He's stubborn, and never backs down when he thinks he's right, and if he feels he's been wronged he became belligerent, even with his younger sisters. I finally came to understand that he found the tone of our house intolerable. And he made the tone of the house tense and combative for everyone else a lot of the time. He wanted out.

free·domˈfrēdəm/
nounnoun: freedom1.
the power or right to act, speak, or think as one wants without hindrance or restraint.

the state of being physically unrestricted and able to move easily.
the power of self-determination attributed to the will; the quality of being independent of fate or necessity.

I'm proud of Chris for choosing to go to a challenging program. The Job Corps is great, but it isn't easy, and it's not usually fun. It does suit his need to get out of our house, though, and his motivating desire to learn carpentry. He whistled while he packed to leave home and had to be reminded by his father to come back inside and give me a hug, and say good-bye to his siblings. If there were apprenticeships easily available like there were in other eras, he probably would have left home years ago to be a weaver or a builder, a smithy or a soldier.

He never wants to move home again, which is unusual (in my experience) for an almost-20-year-old, but I think he's right. He'd be much happier in his own place, where he had to meet "life" demands that he get and keep a job to be comfortable, but not "parent" demands like a curfew and video game limits that he objected to as random and unreasonable.

He didn't like the tone of our house, which is a bit on the earnest side. Dinner conversation:

"What did you learn today (Ravenclaw)?"
"How did you help someone (Hufflepuff)?"
"What are you working on this week (Gryffindor)?"

He didn't exactly gag into his food, but some days it was close. He was a Slytherin at heart, and at family meals there was little scheming or appreciation for subterfuge or superiority. The ways he plotted to sneak out of the house at night were unprecedented, even though he's the sixth child. Was he in constant trouble? No, more like super-frequent.

At dinner this week, the household tone was so different. There was no jeering, no teasing, no provoking, the usual things he did to keep us mindful of his impatience with the usual do-gooder cheer. This only highlights differences in temperament. I would have had kids in all four houses at Hogwarts were they so lucky to be called to a magical life.

Oh. Wait. All life is magical.
And in Harry Potter, all the houses are valued equally.
It's just that their residents can't all live together, not once they embrace their destinies.

Posted by Shoot For The Stars Foundation at 7:00 AM